This post is a re-print of an article co-written by Bertrand Alexis (an old friend from our times in Qatar) , and myself and first published online on ACC Docket on August 17, 2017.

You’ve likely heard about bitcoin by now, especially given its ballooning value from US$500 to US$3,000 — all within one year — and similar cryptocurrencies like Ethereum. You probably know that blockchain is the underlying technology for bitcoin and that the technology can potentially change the world. There is also something called smart contracts. As an in-house lawyer, you should be prepared for when your CEO asks for cost reductions by applying blockchain technology and smart contracts.

In other words, general counsel will, sooner or later, face the following question: Why should the general counsel spend time, effort, and money to determine whether blockchain and/ or smart contracts could be right for the company? Let’s see what answers we can give.

1. Underlying technology for bitcoin, but so much more

We know that blockchain entails a variety of vertical applications across many industries. Bitcoin is only one such application. The blockchain applications which currently hold the most promises are (1) around the supply chain to ensure the authenticity, origin, tracking, and viability of products along the supply chain (also addressing counterfeiting/ fraud risk and compliance concerns); (2) in the fintech industry; (3) around digital identity; (4) in the healthcare industry such as medical records, clinical trials, and prescription drug monitoring; and (5) real estate title and intellectual property rights. But there is so much more. Will this affect your business?

There is no avoiding understanding the basic concepts that make blockchain special. The best summary of blockchain has been decentralized ledgers with encrypted transactions. Encryption combined with distributed ledgers is the basis for the variety of “killer apps.” That is one reason blockchain is also referred to as distributed ledger technology (DLT). DLT has been defined by Carla Reyes, a blockchain specialist, as “computer software that is distributed, runs on peer-to-peer networks, and offers a transparent, verifiable, permanent transaction management system maintained through a consensus mechanism rather than by a trusted third-party intermediary, and that guarantees execution.”

3. A few good pictures and articles to explain

An increasing number of articles (including this one!) are being prepared to help business people get on board the blockchain train. Some of the best are cited at blockgeeks.com. A picture of decentralized distributed nodes is also important for non-techs to visualize the effect of distributed network technology. 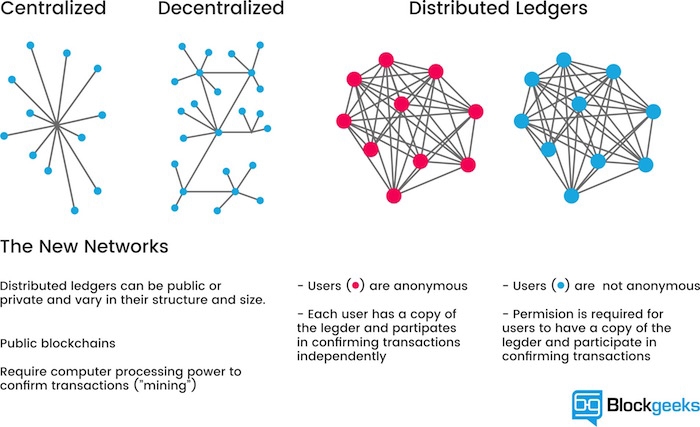 Ledgers with encrypted transparent ledgers that are decentralized allow blockchain to disintermediate and distribute value, knowledge, and services in a multitude of ways.

Another good source of articles and books is found here.

Critics contend they are neither smart nor contracts. A good example of a definition is:

“A smart contract is a contract captured in software that automatically performs the obligations the parties have committed to under their agreement.” The “father” of smart contracts, Nick Szabo, originally defined smart contracts as “a computerized transaction protocol that executes terms of a contract.”

But general counsel are skeptical. Questions will include: To what extent can a contract be reduced to a series of programming protocols and/ or executable actions? There are a variety of smart contract models which are being debated and implemented. Smart contracts also link to blockchain data as a source of data inputs to finalize executable contracts. Smart contracts will accept the blockchain to obtain the required data (interest rates, loan amounts, police reports for car damage, product delivery, etc.) to complete the transactions for loans, sales, or insurance payments, for example. The combination of blockchain and smart contracts can therefore increase efficiency, reduce manual input mistakes, and increase transaction speed.

The self-executing nature of smart contracts has led to philosophical and policy statements such as “code is law” to prevent any human interference. These statements have been hotly debated because of a software bug that adversely impacted crowd-funding investments made through the Ethereum-based decentralized autonomous organization (DAO) platform in 2016.

The White Paper on Smart Contracts prepared by the Chamber of Digital Commerce provides 12 use cases currently being considered as smart contract applications. A copy of the white paper can be downloaded here.

5. How can it change the world?

There are many who believe that blockchain will transform the world by impacting many traditional processes. This transformation potential is based in large part on three themes: transparency, trust, and transfer of value.

Transparency (and ethics) is exemplified by the potential for blockchain to clarify and expedite sourcing and tracking of food products (Walmart’s efforts are one example) and blood diamonds (Everledger, a global digital registry for diamonds, powered by the blockchain is already tracking one million diamonds).

Blockchain has the potential to transfer trust away from (1) traditional intermediaries such as banks and (2) record-keeping companies such as governments for real estate titles and hospitals for health records toward decentralized nodes of the blockchain, allowing individuals greater control over key records and their personal data.

This transfer of trust is also a transfer of value away from centralized institutions that have held control over information and records. Banks, insurance companies, healthcare companies, and governments that control land registries and corporate records will need to understand the transformative power of the blockchain and how it can upend traditional record-keeping and the trust that they have held for so long.

6. Your competitors may already be doing one of the following:

a)    In the fintech industry:

b)    Supply chain: Walmart partnered in 2016 with IBM and Tsinghua University in Beijing to digitally track the movement of pork in China on a blockchain to enhance transparency and food safety.

In March 2017, Maersk also partnered with IBM to enhance the management of ship containers and to streamline processes, reduce costs, fraud, and delays, and facilitate payments to custom officials. Watch the video below:

Their goal is to process 10 million containers using blockchain by end of 2017!

Toward the end of 2016, Chronicled launched CryptoSeal prototype to secure the content of packages and containers, thus with very promising prospects to fight counterfeit drugs.

c)    Trusted digital identity enables users to securely control the attributes of their identity (self-sovereign identity) and to enhance the security and privacy of their personal data.

d)    Healthcare industry: the US Food and Drug Administration and IBM’s Watson entered into an agreement in January 2017 to explore the use of the blockchain technology to securely share patient data.

Other examples and use cases are described in the White Paper on Smart Contracts by the Chamber of Digital Congress.

The first regulatory concerns arose when certain state regulators began regulating the use of bitcoin in light of KYC requirements (issue of payor or payee using a pseudonym) as well as tax evasion and money-laundering risks. When New York state enacted bitcoin regulation, some operators went to New Jersey and others shut down. Some bitcoin/ blockchain supporters are advocating for a “sandbox” approach to regulation, namely, to allow certain companies an area (or a sandbox) in which the bitcoin activity will remain unregulated for a certain period of time in order to observe the evolution of the activity and better identify potential regulatory issues without adversely affecting the business in its early stages. The United Kingdom, Switzerland, and China are jurisdictions that have sandbox regulatory environments for certain bitcoin or blockchain activities, notably in the fintech sector.

Nonetheless, the negative publicity from recent cases of cybercrime — in which bitcoin payment was requested by the ransomware blackmailers — as well as the increased sensitivity for data privacy concerns overall, will increase pressure to regulate bitcoin and blockchain.

Regulatory concerns have been raised at early stages of blockchain technology developments in part due to bitcoin and its use by the darknet (a darknet marketplace called Silk Road was closed down by the FBI to put a stop to the sales of narcotics by organized crime in the deep web) and lately by the recent massive ransomware cyberattacks such as Wannacry, demanding payment in bitcoin to release data.

We therefore cannot exclude the possibility of further regulatory constraints, fines, and penalties.

In spite of all the positive press regarding blockchain, there are some obvious areas where improvements are required. They include: (1) energy consumption: the energy required to “mine” blockchain (the process by which synchronization of encrypted digital ledgers is ensured), is considerable. It is estimated that the current energy consumption of blockchain is equal to that of the country of Denmark. This will create problems as blockchain scales. Some solutions to alleviate the mining issues are being developed, including shifts away from “proof of work” toward “proof of stake” and even a concept of “proof of authority” to address these concerns; (2) privacy: given that the blockchain represents a permanent, immutable, transparent, and distributed ledger, certain privacy issues will be raised. It may be virtually impossible to implement the “right to be forgotten” based upon European privacy laws; and (3) the use of blockchain and related cryptocurrencies for illegal purposes due to its anonymous features.

9. When will it impact the law department?

Smart contracts are being written and developed now. It will be a challenge for national laws to keep up with the blockchain applications, thus a challenge but also an opportunity for corporate legal departments to give advice and contribute to the disruption of old approaches and processes. However, the most promising areas for smart contracts would appear to be those areas where there is significant volume and standardization (loan agreements, supply contracts) combined with simple execution requirements (insurance payouts, equipment rentals, and simple leases).

10. How to monitor developments

There are a variety of online sources available to monitor developments for blockchain and cryptocurrencies. You should always begin with ACC portal resources, but we also recommend checking the Chamber of Digital Commerce website for continuous developments.

It’s time to get the in-house community aware and involved in the blockchain smart contract revolution!